Lots of fun stuff to report on and a little bit of author news.  First up, the fun, specifically, what the oval office has to do with taking out the blood-sucking fiends that were once overrunning and destroying our budding nation... and what all that has to do with moderate climate of California?

Well, for those not already in the know (which probably isn't many of you), the fabulous alternate history vampire horror romp by Seth Grahame-Smith, Abraham Lincoln: Vampire Hunter, is becoming a big-time movie.  My decadent husband emailed me a link to the posters for it just a short while ago, and now I share them with you.  Aren't they fantastic?!

(Click each image for its full-size version at IGN.)

Isn’t that cool?  Well, I think so, at any rate.  I loved the book and the movie better live up to it, or else... Okay, what could I do about it besides whine and complain?  Nothing!  But, my threat is still mighty and fearsome, I tell you!  It is! It is!! (Insert rawr face here).

Next up is some fun that was motivated by some not so fun.

The not so fun was my husband destroying his iPhone when he landed on his booty.  The phone was in his back pocket along with set of dykes. 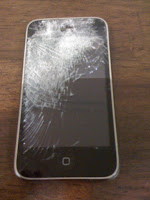 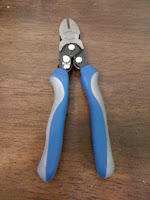 And since freelance work rather requires having smart phones (gig notifications come in calls, texts, and email, and they all expect near-immediate responses or else it’ll be offered to someone else), my decadent had to buy a new phone ASAP (and way ahead of our plans to do so).  To help ease the owie of the sudden extra budget crunch, we played with Siri.  Here are some examples of our silly fun with her. 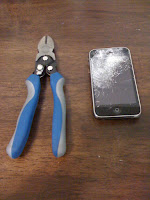 
DH: What does your name mean?
Siri: I don’t think I can explain it in your language.

This went on and on, and was probably funnier for us to experience than for you to read simply because we were really tired, in serious need of entertainment, and just a wee bit punchy.

We also looked some videos about this online.  Amidst the childish scenarios of teenagers inputting their own names as a string of curse words just to get Siri to curse, we found this gem by College Humor about Siri getting caught in the middle of an argument between a husband and wife. It’s hilarious.  And yet... poor Siri.

Next up... the discovery of this incredible trailer for the X-Box game, “Dead Island.”
Doesn’t that look great?!  Our anniversary was coming up, and we love to game together, so decadent husband and I went out and bought it.

...And we sold it back (for practically pennies, grar!) only a few short days later.  First, it wasn’t two-player, which we should’ve looked for before we bought it.  But, even then, we can work with single-player games if we like them enough.  This was not one of those games.  I don’t like to speak ill of things, so let me just say that it was no “Left 4 Dead 1 or 2” (which we went and played again just to shake off the boring that was our bad purchase).

Le Sigh... Perhaps the people who made the trailer should’ve had more to do with the game itself, because it should’ve been much more awesome than it was.

But, for a pick me up, I offer this humorous review for Peter Pan peanut butter we stumbled across on Amazon while making a few of our regular orders.  I giggled stupidly for quite a while from it. 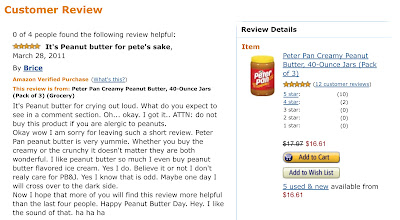 And, last, but certainly not least... 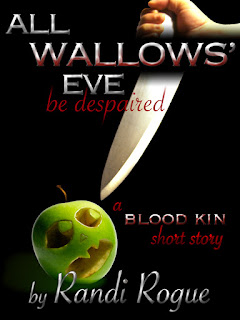 All Wallows’ Eve is finally available on almost all major online retailers that I am aware of.  It can be purchased for $0.99 at each of the following:
Amazon    iTunes
Barnes & Noble
iTunes    Sony
Kobo     Diesel
Smashwords

Also, “B” is out to some betas/editors... in part.  It’s a monster of a story, cranking in at over 40 chapters and 160,000 words.  I’m finding out that I need to expand on a couple parts, and not to reduce some as much as I'd expected (hoped ~_~ooo), which will possibly add a few hundred, if not another thousand words or so.

I’m trying not to get bothered by this length, but instead, trying to think of it as giving my readers a lot of bang for their buck.  Let’s hope this holds out through the rest of the editing process.  Either way... it looks like “B” is only a couple weeks or less from release... FINALLY!

And this was supposed to be my simple story indie ebook experiment.  It’s turning out to be quite the production.  Makes me glad I didn’t choose one of my “complex projects” for this initial endeavor. Tee hee.

Well, I think that’s enough for this lengthy post.  Thank you all for your support, entertainment, readership, and, of course...

Posted by Randi at 12:40 PM
Email ThisBlogThis!Share to TwitterShare to FacebookShare to Pinterest

Homebody
No, Baby, Daddy's Head Does Not Come Off

Dreamslayer
The Settling Down in Powell's Daydream

Drabbler
Under the Influence (writing sample)

The purpose of one who is perpetually under construction...

by Randirogue
unless otherwise specified